While steps have been taken to reduce smoking on our beautiful beaches, we still need to work together to keep them smoke and cigarette butt free.

The Surf Coast has some of the most beautiful beaches in Australia which attract  millions of visitors each year.  Surf Coast beaches provide an important social and recreational outlet for visitors and locals and are thought of as a local ‘park’ by many.

Cigarette butts are ‘toxic time bombs’ containing significant pollutants that can harm wildlife and damage coastal environments. They can take up to five years to break down in sea water and cost management authorities thousands of dollars each year to pick up.

In 2008 the Surfrider Foundation lobbied local land managers and authorities for smoking to be banned at a number of beaches within the Surf Coast Shire.

The following summer a ban was placed on smoking at all Surf Coast beaches.  The decision marked the adoption of the first coastal smoking ban in Victoria.

The decision has played an important role in reducing cigarette butts on the coast. The Surf Coast ban on smoking extends along approximately 55 kilometres of coast from Torquay to Lorne including the iconic Bells Beach.

The Surfrider Foundation is working with the Surf Coast Shire and the Great Ocean Road Coast Committee to support the ban. 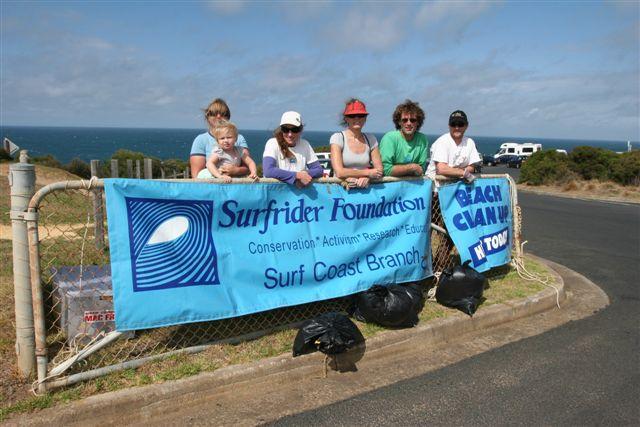 The Great Ocean Road Committee, as managers of much of the foreshore from Torquay to Lorne, provides bins on grassed foreshore areas and adjacent to sand areas, conducts litter clean ups twice a week and once a day in park season.  The Committee also supports and coordinates volunteer clean up activities on the foreshore

Your cooperation will contribute to a safe, healthy and litter-free coastal environment for everyone to enjoy.

Surfrider Foundation is a non-profit organisation dedicated to the protection and enhancement of Australia’s oceans, waves and beaches for all people, through CARE: Conservation, Activism, Research and Education.  For more information, to get involved or to volunteer, Please email info@surfrider.org.au .