Stand at Point Addis and look east to Port Phillip Heads in the distance. Gaze west along the coast to the Split Point lighthouse at Aireys Inlet. Look across the southern ocean and glimpse gannets diving or swallows swooping past the cliff face.

Spectacular Point Addis and the Ironbark Basin are fairly new additions to the Great Otway National Park but they have been important to people for thousands of years. 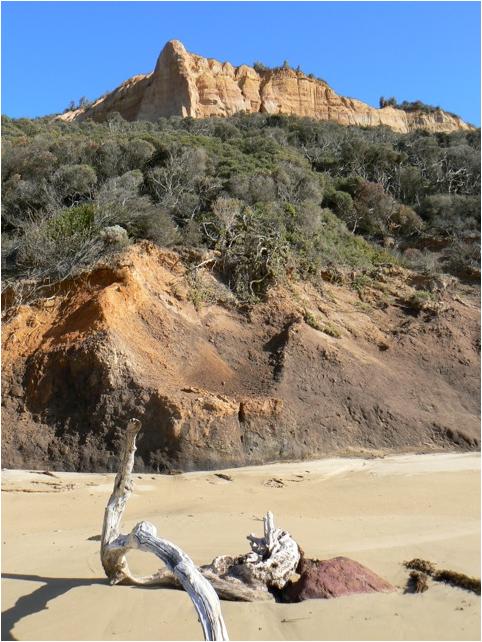 The importance of the area is evidenced by the middens that have been found in the Basin.  Middens are the remains of meals of shellfish once gathered and eaten by Aboriginal people.  These middens show that the Wathaurong people feasted on the sea bounty available here thousands of years ago.

Unfortunately the area’s more recent popularity has put increasing pressure on this fragile but beautiful and diverse environment, already scoured by wind and wave. Some older locals remember driving their cars onto Addiscott beach to go surfing and swimming although fortunately beach access is now only by foot on a new boardwalk and steps.

The work of volunteers in the area has become integral to its wellbeing. The Friends of Point Addis (FOPA) formed around the time that Point Addis became a Marine National Park in late 2002. Under the passionate guidance of Lynne Flakemore, the group embarked on cliff top revegetation, intertidal monitoring of the shore species, film nights and disseminating information to the public.

In the past two years, FOPA have worked closely with Parks Victoria which now manages the Ironbark Basin and Point Addis. Rip Curl and Quicksilver have also given invaluable support to the group.

Working bees have included a ‘Boneseed Blitz in the Basin’, weed eradication, plantings of indigenous species on degraded areas, mulching and fencing to protect against rabbits.

Members have also been on “rock pool rambles” and participated in the Great Victorian Fish Count to assist in monitoring marine species at the Jarosite Reef at the eastern end of Addiscott Beach.

Warning to visitors: stop the spread of Phytophthora cinnamomi!

The group has turned its attention to the dangers posed by Phytophthora or Cinnamon Fungus as it was once commonly referred to.  The FOPA is calling for all visitors to the area to be aware of the damage caused by the Phytophthora which can be spread by walkers and bike-riders. You can avoid the spread of this disease by sticking to the designated track signs and keeping their dogs on a lead.

An invitation to all those passionate about the area:

To get involved, call Bronwyn Spark 5263 2224 or email bronwynspark@gmail.com to register your interest.