The Torquay Lions Club and LorneCare environmental group have spent the first day of the year for the past 10 years removing litter and debris on the foreshore areas in Torquay and Lorne after late night celebrations.

LorneCare’s Co-Convener Alain Purnell said the group loves doing the clean ups and this year focused their efforts between the Lorne Pier and Swing Bridge.

“This year we managed to cover significantly more area in Lorne due to the limited glass on the coast which is very encouraging for the community.

“The group loves helping out and it’s a great way to kick off the New Year,” he said.

Both groups have praised the Surf Coast Shire for the enforcement of the glass-free policy on the Surf Coast, stating that there was minimal glass compared to previous years. 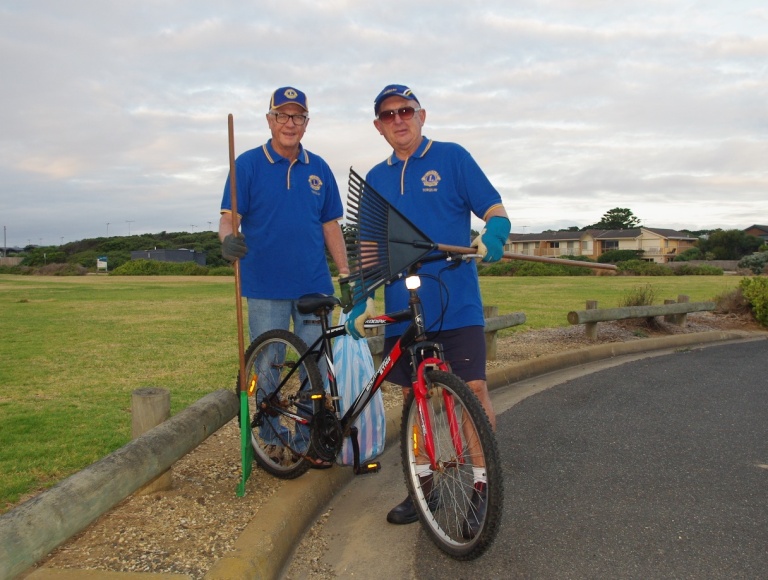 Lions President Brian Keane praised the New Year’s Eve revellers who had enjoyed themselves only a few hours earlier.

“There was very little broken glass compared with previous years but unfortunately some people just do not seem to understand the dangers of bringing drinks in glass bottles to the beach and foreshore,” he said.

“Broken glass is the thing we worry about most while collecting the rubbish that is left on the lawns and in the sand.

“As well as the many bags of rubbish we gathered, we also collected two homemade ‘bongs’, one bike, one collapsible chair, one small beach tent and $15 left on the beach from last night.”

“We were pleased to see less rubbish on the foreshore areas. It’s fantastic to see locals and holidaymakers being more responsible with their litter disposal on the precious coastline.”

Volunteer and community groups are the backbone of conservation efforts along the coast, with these groups contributing more than 10,000 hours of labour to the coast each year. To find out how you can get involved and to contact your local volunteer group, go to www.gorcc.com.au/volunteering.