The Fresh Air Kids is a group of local families that want their children to spend time in the great outdoors, learning through playing in nature.

A community partnership with the Great Ocean Road Coast Committee, Fresh Air Kids aims to encourage local coastal kids to grow up observing the environment in more detail than even most adults do. 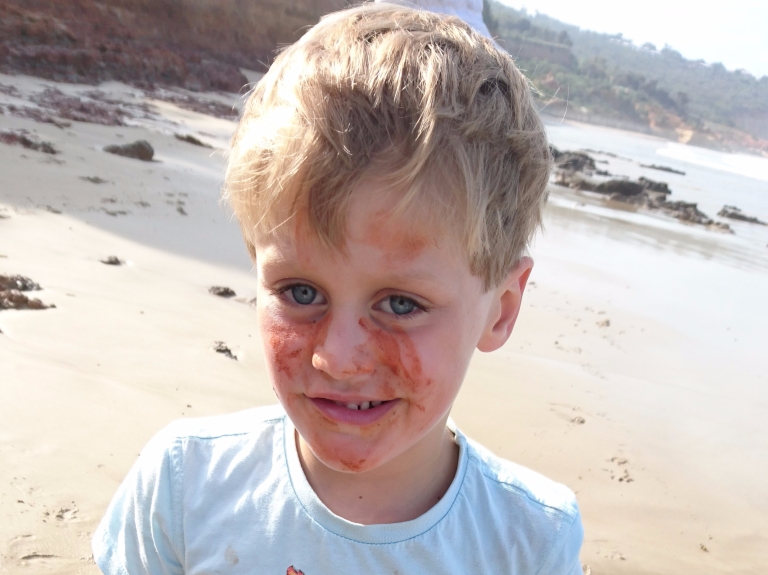 The weather this week could not have been more different than the week before; beautiful sunshine, warm temperature and a glassy ocean were the backdrop for another session in the Point Roadknight environment.

Today we walked towards Soapy Rocks, exploring through the rocks along the way, making paint with the ochre and looking at the effects of the wild weather on the coastline from exactly one week ago during our previous session.

The cliffs are made of ochre, this sedimentary rock type has a beautiful rich red colour. Many of the cliffs in Anglesea are made of this loose and easily crushable rock, and a large seam has been exposed on the east of the boat ramp. We collected some loose pieces, crushing it against another rock and using seawater to make the paint. Our faces, hands and legs were soon covered with dots and stripes. We talked about the lives of the indigenous groups, and thought about if they would have used ochre for painting during their time here on the coast.

As we progressed along the coast, we noticed that a large amount of sand was missing next to the cliffs. A sheer metre high drop has been removed from the beach, as if a huge excavating machine had gone past. We went a bit closer to investigate but were careful to stay away from the fragile and dangerous cliffs, they fall regularly in a constant reshaping of the coastal contours.

As we explored it became clear that what we were looking at was the effect of the storm exactly one week ago. When we were out exploring the point of Roadknight in the ferocious wind, large waves and currents were sweeping away huge amounts of sand from the eastern side of the boat ramp. In fact, the reason we could climb and explore the ochre seam was for this exact reason, because the beach level had dropped so much. The sand was literally just swept away.

We talked about how storms and weather reshape the coast from week to week, and using our skills of observation to always be on the lookout for changes to our coastal environment.

The story of Soapy Rocks

We got out our guide to the flowers and plants of Anglesea and Aireys Inlet and identified Hop Goodenia which still has some nice small yellow flowers on it. Most other plants have long since flowered and produced seed and are now getting ready for the colder season.

Some areas of Soapy Rocks have been revegetated with great success, we are lucky to live in an area with amazing floral diversity, a biodiversity hotspot. That is, we have a great variety of different plants in our area. Our identification book contains over 300 species!

After the landslide in 1972, Soapy Rocks was revegetated with Australian natives, plants from all over Australia. Many of these have been now declared as weeds in our area because they invade and take over natural communities of plants. To get the best possible habitat for our native animals, we should plant species that have been growing here for thousands of years, evolving with the local insects, birds, mammals and the environment as a whole.

We talked about how we are going to plant 2000 plants where the weeds have been taken out, and everyone is looking forward to being a part of that.

We explored the rockpool areas and found creatures like snails and crabs. On our way back we walked through the bollards that were used as a barrier and sand trap to help prevent erosion. The layers of sediment in the cliffs at Soapy Rocks form some of the most beautiful geological structures on the coast, including ‘The Eye of Roadknight’.

The most fun though was due to the wonderful weather and getting our clothes all wet paddling in shallow water and the small waves. A BBQ under the Moonah to end the day was a great way to finish!

We’ll be meeting again weekly in Term 2, and encourage Anglesea families to join us each week on Tuesdays at 4pm. For more details please email peter.c@gorcc.com.au.