There’s a war on weeds being staged at the Great Otway National Park and some dedicated environmental warriors have been winning significant battles.

The Friends of Eastern Otways have been working tirelessly to protect and rehabilitate the internationally significant coastal heathlands at Anglesea – renowned for their wonderful flora and fauna biodiversity.

The 1983 bushfires that swept through the Anglesea area allowed many environmental weeds to invade these precious heathlands smothering and crowding out many smaller, more delicate, indigenous plant species.

More recently, fuel reduction and ecological burns have also influenced an increase in the weed load due to stored seedbanks in the ground responding to the stimulation of fire.

Coast Wattle and Coast Tea-tree have been the major offenders.  These plants form monocultures (meaning only that one species grows in the area) and smother all neighbouring plants.  Coast Wattle in its pure form, does in fact belong in the area but has hybridised with the Sallow Wattle in the form of a weed.

In 2005 the Friends of Eastern Otways commenced a project to remove the environmental weeds that had invaded the heathlands along the Great Ocean Road at Anglesea.  No replanting was required, as the existing seedbanks germinated following the removal of weeds and the addition of rain.

Various conservation, community and student groups have assisted with the project which has also been supported by Parks Vic, DSE and GORCC.  All these efforts have returned, what was an almost an impenetrable barrier of environmental weeds, into a highly admired heathland.

The wonderful success of this project has been marked by an impressive comeback from wildflowers and indigenous plants. 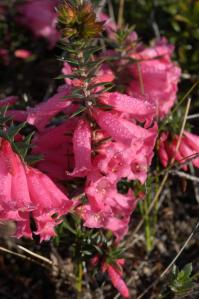 Silky Guinea-flower, Common Heath, Twiggy Daisy-bush, Common Wedge-pea, Silver Banksia, Chocolate Lilies and Native Violets are just some of the flowers growing where weeds have been removed, while terrestrial orchids can be found scattered throughout this restored environment. 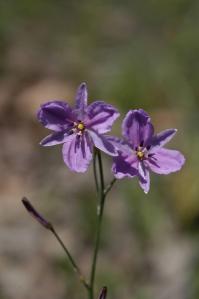 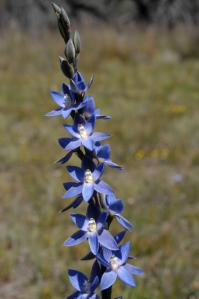 Despite the accomplishment, work must continue in the area.  Environmental weed seedlings continue to appear and the war is never won.

The Friends of Eastern Otways meet on the second Tuesday of each month in the above area near the corner of the Great Ocean Road and O’Donohue Road, Anglesea from 9.30am to 11.00am.

This small group of volunteers work in a beautiful setting against an ocean backdrop to ensure that this very special area of the Great Otway National Park is protected for future generations to appreciate and enjoy.  The group would love to have some more helpers and you will be ensured of a warm welcome if you would like to come along.